Look at the numbers in Figure 1. What do all of these have in common? They’re all text editors. “But wait, MyIDE can do many more things!”, you say. And you’re right. IntelliJ sure is awesome. But even when you’re programming in your favorite IDE, you’re still just manipulating text, despite all the fancy navigational and code completion features. So what’s wrong with that?

Do we want programmers in 2050 to still have to deal with missing semicolons?

Figure 1. Usage of Development Environments. I plotted it with data from the Stack Overflow Developer Survey 2016. Keep in mind that people use many tools, hence the numbers add up to more than 100%.

In programming, we all start as noobs who have to fight Syntax Errors. The first programs people interact with tend to be Browsers, Search Engines, Messengers, Social Networks and not Code Editors. What makes the latter so very different is that while they also appear to accept free-text, they actually have hard syntactic rules about what input is accepted and throw errors at you for not following them. If you’re lucky, you’ll at least see the resulting errors in-line, but sometimes even the best parsers can’t figure out where the error is located.

Have an unorthodox programming idea of your own? Submit a paper to the next edition of Salon des Refusés at ‹Programming› 2018 in Nice, France by Februrary 1, 2018!

After surviving the first dozens of hours of syntactical failing, the grammatical rules of that language become ingrained in the programmer’s mind and there are fewer and fewer syntax errors. These errors never fully disappear though, not even pros are immune to typos/slips and it doesn’t require a LISP to get your braces wrong. Every time you use more than 4 consecutive braces you have to manually count, instead of quickly getting an accurate unconscious count from your brain (known as Subitizing (Mandler, 1982). It might “only” be a daily nuisance for professional programmers, but for the novice having to learn an arcane syntax while also getting comfortable with computational thinking, might just be a fatal barrier.

And that’s just the start of the daily absurdity of a programmer’s life: Tabs vs. Spaces? Where to put my opening/closing braces? How do I order my imports? What should be the character limit per line? Do I space around my control statements? Should I use trailing commas? Even if you don’t take part in these bikeshedding discussions, as a responsible coder you still have the extra mental load to take care to stay consistent with the project’s code style.

Now I’m not saying that there aren’t solutions to these problems. There is EditorConfig for consistent indentation. In the JavaScript world we have ESLint to enforce all kind of code rules and based on it StandardJS emerged hoping to create a new code style standard. Both offer command line options to not only nag you about your inconsistent code but actually try to fix it. Just a few weeks ago Prettier appeared which fixes by default and also takes care of breaking your lines. Fun fact: StandardJS and prettier code is not compatible by default. These problems were also attempted to be solved on a language level, most notoriously by Python which does away with blocks through braces and uses indentation for block scoping. While it voids bikeshedding in many cases, many others remain.

I can’t help but think that we’re just working around the fact that our editors are just manipulating text. Or as Einstein (maybe) said:

A clever person solves a problem. A wise person avoids it.

It seems rather ironic that a lot of non-bikeshedding discussion in programming is about clean separation of business logic and the user interface (also known as Model-View-?, see Figure 2) while code itself is business logic and user interface in one. One quasi-bikeshedding prime example is the trailing comma. While the argument that with it CVS diffs look cleaner (Graf, 2016) certainly holds, people find it understandably visually displeasing.

How to do MVC:
1. Take any three things, ANY
2. Call them Model, View and Controller
3. Draw some arrows between them

3. Visual programming languages to the rescue! Or not…

Fortunately we also have so called “visual programming languages”, that solve these and other problems. Specifically we shall look at the subcategory of tree-languages, which is a term I made up to differentiate them from visual languages like LabVIEW and others that model dataflow as a graph. These graph-languages definitely have their own raison d’être (pardon my French) but I’m not yet convinced they are appropriate for general purpose programming.

Widely known and quite similar are MIT’s Scratch, shown in Figure 3, (Resnick et al., 2009} and Google‘s Blockly (Fraser et al., 2013), which transpiles to JavaScript, Python and other languages. They present all statements and expressions as blocks that can be linked together or nested. Different colors indicate different statement types, and they rely heavily on mouse interaction. Both are educational tools and not meant for production usage. There are multiple things that make these language impractical for everyday coding tasks. I already casually mentioned the lack of keyboard support, but that might actually be the deciding reason why these tools aren’t used more widely. 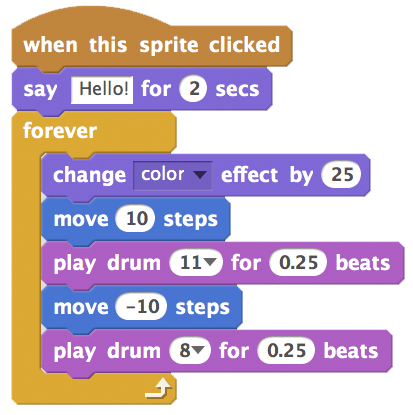 Another choice that strikes me as unfortunate is that all of those visual programming languages are actually their own programming language, even though they could just as well be a structure editor over existing languages (thereby leveraging the ecosystem and allowing the editing of preexisting code). The strong separation from existing technologies plays into the binary perception of visual programming languages as just being a different paradigm, while in reality they are multiple different paradigms in one. This conflation makes it all too easy to reject it on the basis of interaction model alone. Even though their real value, and this is where I blaspheme, is in constraining what code we can write. There really should be no reason why we’d want total freedom in our code editors…

4. The reason we want total freedom

Code tends to change. Groups of statements are extracted into functions, expressions into variables and the other way around (also called inlining), Parameters are added, renamed, reordered, (statically) retyped and so on. Our editor needs to make these common tasks as frictionless as possible. And that’s what current editors mostly succeed at. You want to add a new parameter at the first position? Just type the name and add a comma. You want to rename something? Select it and just type the new name (IDE bonus: use refactor to rename every occurrence).

There are a plethora of instances where this free interaction model enables the programmer to quickly achieve what is intended. But when adherence to a consistent code style is wanted, there is bound to be some blandness in the process of always getting it right.

What I’m proposing is not a radically different way to write programs. If you’re looking for that, look into Eve (among many others). I definitely think those approaches are paramount but they are also moonshots. The currently popular programming languages are proven to work and replacing a popular language takes decades. What I am proposing is to ease the interaction we have with these languages and this is what a constrained editor needs to get right to beat the current editors:

As a proof of concept I worked on a version of such a constrained editor but only for JSONs, a data format and a subset of JavaScript, so that I don’t have to handle the entire complexity of the language while still demonstrating the upsides of the interaction model. Not all common code transformations are implemented yet, but those that are require less keystrokes (and I’d argue less cognitive load) than in traditional editors. Examples of those are inserting & deleting of properties/elements and changing of types. There is also already some context-sensitivy built-in, as the keymap only shows actions that are relevant for the selected node. It can be found on GitHub: https://github.com/gregoor/syntactor.